Clockwise: Stewart even looks like Old MacDonald! Now that’s what you call heritage produce. Look at that colour! This adds new meaning to the term ‘household pet’. Bee taking a moment in her garden by the feijoas. Mother pig and her piglets.

Bee Winfield and her partner Stewart Seesink have transformed their eleven hectare property, at Nannup in the south-west of Western Australia, by building soil. Bee’s been obsessed with compost since she was a teenager, and is still making it forty years later. After courses on permaculture, holistic management, earthworks for water harvesting, soil biology and life in the soil, Bee was ready to improve her soil; she and Stewart are so focused on life below ground that their son describes them as ‘turd nerds’ – Bee prefers ‘soil life coach’.

Over the last decade their organic farm business has grown in leaps and bounds. They regularly supply fully tree-ripened fruit, vegetables grown with compost, grass-fed meat, and eggs and dairy to the Nannup and Margaret River farmers’ markets, Perth City Farm market and many others.

Bee and Stewart recently renamed their farm ‘Merri Bee Organic Farmacy’ to highlight the fact that food grown in biologically active soil is the best preventative medicine, the cheapest probiotic, and the best food to nurture developing children. Their animals also get to enjoy wholesome organic feed and the freedom to express their innate behaviours; unfortunately, this sometimes means they dig up the carrots!

Before Bee met Stewart she had built a passive solar mudbrick house, and she has continued to develop the permaculture surrounding it for the last thirty years. The farm now boasts over ninety species of fruit and nut trees, including: carobs, pecans, pine nuts, sapotes, macadamias, avocados, mulberries, figs, feijoa, cherry guava and Japanese raison. They have embraced bamboo for its many wonderful properties, and call it a biological air conditioner. Willows, poplars and timber trees have not been forgotten, and yields keep surprising them.

To help meet the rising demand for pastured organic produce, extend their experience and provide a buffer against climate change, the couple bought another twenty hectares, in Karridale, in 2012. Bee’s mission is to perfect – and pass on to others – any technique to remove carbon from the air and transform it into topsoil, fast.

The couple’s intensive study of soil microbiology resulted from their farm being hit hard by climate change since 2007; they realised their district was desertifying. Non-wetting sands and steep clay hills bereft of topsoil are okay, while it rains, a lot! However, intense sun, and longer periods between isolated rain events, have become the new ‘normal’: the average annual rainfall at Nannup is about 1000 mm, but only 450 mm fell in 2010. Bee and Stewart have found ways to keep young plants alive, using swales and increasing biomass in the soil: more plant roots and associated microbes mean more passageways for air and water, and more fertility. The loss of biodiversity – above and below ground – over vast areas of WA has focused them on proving that biological farming works, including broadacres.

At Merri Bee the golden rule is ‘never bare the soil’, meaning full cover, all the time. Their soil is protected, by: growing masses of multi-species cover crops; encouraging deep-rooted perennials such as chicory, alfalfa and perennial grasses; and sowing amaranth, millet, sunflower, lab lab and sorghum, most of which survive dry summers. Some areas have been transformed into dark-chocolate coloured, crumbly, moist soil, and irrigation required has been reduced by about seventy per cent; every drop seems to be soaked up. Carbon is now being pumped out of the air and into the soil all year round, and at depth.

When Bee arrived the block was infested with doublegees and kikuyu grass; there were only five trees. But Permaculture One (Bill Mollison and David Holmgren, Tagari Publications, 1981) was the ‘bible’, and a food forest was begun. Today towering pecans and spreading figs, oaks and carob trees grace the hills, providing ecological services, food and fodder – some species took twenty years to bear, but don’t be put off! In spite of climate change, a quarter of the house is devoted to food storage. Abundant chlorinefree water, plenty of healthy food and free energy are the rewards of permaculture.

Bee’s gratitude to Bill Mollison’s genius and tireless devotion to permaculture is unbounded; his visit to Nannup in the late 1970s encouraged and inspired a generation. Bee and Stewart hope to inspire others too. They have a vision of regenerated soil supporting intensively grazed animals between fodder-tree lined swales; they consider swales essential to tree establishment. With bamboo, trees and perennial pastures sequestering many tonnes of carbon each year, and providing nutrient dense foods, they know their approach works.

For more information see: www.merribeeorganicfarm.net.au. The farm will be on the south-west tour at APC13 (Perth, October 2016). 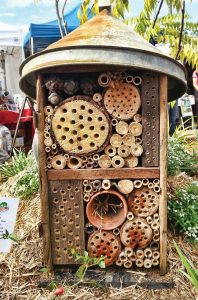 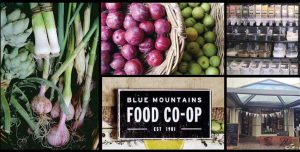 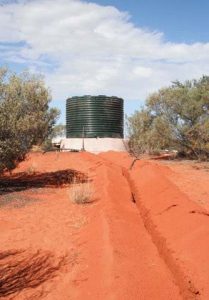