Seed Mob is set to become Australia’s first Indigenous youth-led environmental organisation. With a vision of a just and sustainable future powered by renewable energy, this national grassroots network of Aboriginal and Torres Strait Islander young people have set out to protect country, culture and communities from the impacts of climate change. Support the creation of Seed Mob by donating, joining or becoming a partner. More info can be found at www.seedmob.org.au.

Pip Media recently donated $2500 to Permaculture Australia’s Permafund initiative which provides grants of up to $2000 to community permaculture projects across the globe. Since 2012, Permafund has funded 51 projects in 15 countries that support food security, seed sovereignty, regenerative farming practices and water harvesting.

‘We follow the permaculture ethics of earth care, people care and fair share, so are happy to share some of the profits that come through the work that we do,’ Pip founder Robyn Rosenfeldt said. ‘We also donated to Firesticks, Bega Aboriginal Land Council Cultural Burning Program and a handful of individuals who lost everything in the fires, as well as in-kind donations to many community organisations.’

Professor Brajesh Singh from the Global Centre for Land-based Innovation at Western Sydney University is one of 300 researchers for the UN’s Food and Agriculture Organisation. It has published findings which have revealed protecting the biodiversity in our soil is essential in adapting to climate change. And a good thing, too, because the more diverse the microbes in our soils are, the stronger our immune systems and protection from allergies and inflammatory illnesses will be.

Top 3 ways to deal with your kitchen scraps more efficiently

Achieve your compost heap’s brown-to-green ratio in the kitchen by adding ripped-up paper, cardboard or egg cartons to your benchtop compost bucket.

Whether they’re headed for the compost heap or worm farm, chop or blend your kitchen scraps and rip up paper and cardboard to help it break down more quickly.

If you only have a small amount of kitchen scraps, freeze them until you have enough to add to add to the compost – it can aid the decomposition process, too.

Last issue we announced Pip Media was nominated for Mumbrella’s 2020 Small Publisher of the Year Award. And guess what? We won! But a magazine, a website, a podcast or a brand is nothing without supportive and engaged readers, listeners and followers. So thank you. 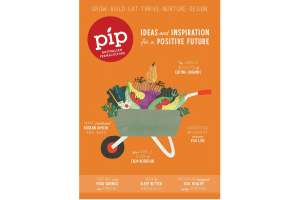